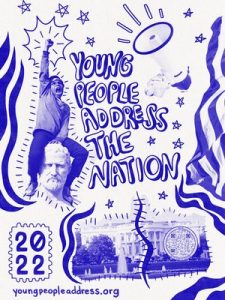 WASHINGTON DC, February 28, 2022 — Young activists have announced the second Young People Address the Nation event, a national day of action to elevate the young people’s reactions and responses to President Biden’s 2022 State of the Union Address.

“Young people are consistently on the frontlines of transformative change, and this is our pivotal moment to shift America’s attention to the future that we need,” said Dillon Bernard, a 22-year-old activist and the Executive Producer of Young People Address the Nation. “The Youth Response to the State of the Union will prove that young people cannot wait around for a hero to guide us all. Instead, young people have emerged as our own heroes and we’re building on the legacy of those who came before us.”

The Youth Response to the State of the Union will be hosted by Sixto Cancel, a Forbes 30 Under 30 honoree and the Founder of Think of Us, and Jeremy Veramendi, a student journalist and the host of the Divergent College Vibes Podcast.

Young leaders held the first Young People Address the Nation event on April 20, 2021, which was the 100th-day mark of the Biden-Harris administration. More than 35 youth leaders and 30 youth-serving organizations joined forces to speak out about the key priorities of young people during this pivotal turning point in our country in a one-hour video special.

ABOUT YOUNG PEOPLE ADDRESS THE NATION